Suddenly loud numerous wailing and mourning piercing sirens cut through the air from the Independence Avenue bridge over the railway line. Since I was standing on top of the Supa Baking Company bus I could see the huge presidential motorcade with numerous flashing red, blue and yellow lights. Fifteen Police officers were riding white motorcycles with the flashing blue lights and piercing sirens. There were 2 black Mercedes Benzes. The front one had the Zambian flag and the second one had the Mozambican flag.

When the 2 Benzes arrived at the dais, the massive crowd wave surged forward. The police pushed the crown back and gestured for people in the front to sit down. President Kaunda emerged out of the front black Benz just as Samora Machel emerged out of the second one. Smartly 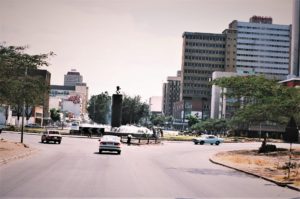 dressed high ranking police, security, and military officers saluted to both Presidents. President Kaunda was a taller big man 1.88m (6ft 2ins) while President Machel was smaller and shorter 1.61m (5ft 3 ins). President Kaunda waving his white handkerchief and Machel walked together up to the podium as ululations from the women reached a crescendo, young women and men dancing came to a climax. The master of ceremony was making a running commentary of the spectacular events on the stage through the large loud speakers. The drumming from dancers was louder as some women dancers gyrated and men dancers leaped into the air serenading both leaders. President Kaunda and Machel were wearing military fatigues. They sat down.

After many short speeches from several UNIP and top Government leaders, President Kaunda was finally called upon to introduce the rally’s guest of honor President Samora Machel. President Kaunda was raising his hand clutching his white handkerchief to the crowd for a few seconds when he vigorously shouted.

“One Nation!!!!!” the massive crowd responded reverberating and echoing between the trees in the Kafue Park.

“Tiyende Pamodzi ndi Mtima umo!!!” the massive crowd responded as the group and I on top of the bus responded with the singing.

“Limba moyo, Tiyende pa Modzi ndi Mtima umo” (be strong, lets walk together with one heart) the crowd responded with the chorus.
President Kaunda introduced President Samora Machel as a close neighbor and a true son of Africa and called on him to address the rally and the Zambia people. There were loud ululations from the women again.

“One Zambia!!!!” President Machel pointed and jabbed one finger in the air.

“One Nation!!!!!!!” the crowd roared very loudly in approval.

“One Nation!!!!!” the crowd roared even louder.

“Viva FRELIMO!!!(Front for the Liberation of Mozambique)!!!”

President Machel began to address the rally in Portuguese with the translator into English.

President Machel said: “…something something  paishi… miseria,.. kunsao Vasco da Gama 1497–1499… 500 anos Portuguese colonialismo”. President Machel gesticulated with his right hand; pointing and jabbing his fore finger to the sky. To empathize how Africans were the rightful owners and Mozambique, Zambia and Africa was their home, he pointed jabbing to the ground numerous times with his fore finger as he seemed to leap off of his toes emphasizing a point. His eyes and face were animated with passion, emotion, and determination.

The translator narrated the political history of Mozambique started with the European explorer Vasco da Gama with the 500 hundred years of Portuguese colonialism from about 1500. The Portuguese did not want to leave until the Frelimo armed struggle up to 1975 when Mozambique gained its independence.

“Aluta!!! (the struggle)” President Machel shouted after about 20 minutes of animated oration sometimes causing laughter from the huge crowd with his stage histrionics.

“Abash capitolismo!!!” (away with capitalism)

President Machel sat down and the crowd roared clapping their hands, cheering as the women ululated. The dais party and the 2 Presidents stood up as their Mercedes Benzes drove to the front of the podium. President Kaunda waved to the massive crowd with his white handkerchief one more time. President Machel waved to the crowd one last time. The massive crowd almost swallowed the two presidential cars as the Police motor cycles led the way and the other more than 20 vehicles of the motorcade followed.

During the rally chills sometimes went down my back at the sheer massive size of the audience and electricity that gripped all of us. I felt very fortunate to have attended the rally to report it 41 years later. The electrifying experience I shared with thousands of my ordinary Zambians made me more patriotic, proud, my chest raised high, loved Zambia and loved Linda Jitanda even more than ever to the end of time.