I woke up from my grandmother and grandfather’s house  rubbing my eyes and emerged out of the door. The October early morning long bright sunrays were shining between the village thatched houses hitting the bare brown ground, dry grass and the naked trees against a clear blue sky. Suddenly two dogs chasing each other zipped past me. Another dog was chasing chickens that scattered away. Two other dogs were chasing goats. I heard the deep loud raised voices, noises, and commotion of many men from the direction of the village mphala or insaka shouting calling the dogs “to stop!!!”

My heart was suddenly beating fast with excitement when I realized what was happening. I ran to Grandmother NyaMwaza who was already up 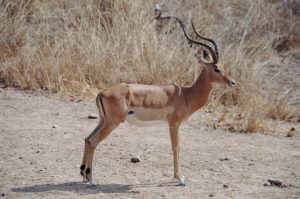 and sitting with her legs stretched out by the small thatched kitchen hut with her bare back basking toward the early morning soft sun rays.

“Agogo! Agogo! (Grandma, Grandma) I want to go to chisokole – hunt with the men!!”

“But I can walk long distances in the hot sun without drinking water, carry an axe or spear for grandfather. I will listen. I will obey the adults!! Agogo nabeya (please) can I go?”

“No, you cannot go. Ndiwe mdoko kuchisokole (you are too young to go on the hunt)’ my grandmother NyaMwanza replied emphatically.

I collapsed to the ground wailing. I rolled on the ground many times kicking the sand with my legs raising dust while crying as loud as I could: “Agogo!! I want to go to chisokole w-e-e-e!!!!” I cried as I hyperventilated laying on the sand. This was in 1960 at Chipewa Village in Lundazi district of the Eastern Province of Zambia in Southern Africa and I was 6 years old.

Grandmother NyaMwaza gently picked me up by my arm as I stood up still crying and sobbing.

“You are too young to go to chisokole hunt,” she said as she wiped my tears and the sand from my face.

“They are older than you. They are not nthanga yako (your age mates).  “In fact your cousins Jemusi and Sokoyala who are your age mates are not going either.”

“They are not going?” I said looking at my grandmother with both surprise and relief.

“Mwizenge, may be next year when you are older you will be able to go. Chisokole is dangerous for younger boys.”

I was dejected and disappointed but felt better. At least I was not the only one of the boys not going on the exciting chisokole.

Early that morning the men had cooked some porridge with herbs from secret special tree roots. Once the dogs had eaten the munkhwala (medicine) porridge, they were so excited and ready for the hunt. That’s why the dogs were excited and chasing chickens and goats because

they were ready for the hunt. The men had delayed leaving for chisokole hunt.

My Grandfather Mchawa and all the men of the village assembled at the mphala or insaka. They had their sharpened spears, axes, knives, and arrow heads. They carried their bows, arrows and nthonga (knobkerries).

I had heard from the men growing up that the way they hunted is the men lined up abreast in a long line. They shouted, yelled, and beat the bushes as they all advanced forward through the bushes at an equal pace within sight of each other. No one was to lag behind and go too far forward. The noises spooked animals that would bound out running away from their hiding places. The hunters would then carefully use their weapons in front or behind them to kill the animals. This is why it was prohibited to go too far forward or lag far behind. Because either way you could be speared accidentally during the intense swift chaotic noisy split second decisions.

The men all took long last big swigs of fresh drinking water in case they were not going to find any drinking water during the long all day hunt in seething October heat. The men whistled and shouted for the more than 15 dogs which were frantically still running around chasing goats with their tongues hanging out. The men lined up abreast in a long line along the western side of the village. They were shouting, laughing, and yelling as some were whistling while calling the names of the many dogs. The dogs disappeared first into the bush ahead of the men. Then the men followed and disappeared into the bush. The chisokole hunt had started.

My grandmother NyaMwaza, all the women of the village, and my cousins were all day anxiously preparing waiting for the men’s return from the chisokole.